We start in this WP Fastest Cache vs WP Super Cache comparison with WP Fastest Cache which does not automatically mean it would be better. The fantastic rating that WP Fastest Cache has on Wordpress.org immediately catches the eye as do the 1.7 million downloads of their free plugin. It is not for nothing that the score is so high, I have years of experience with this plug-in and is still my favorite for free cache plug-ins. 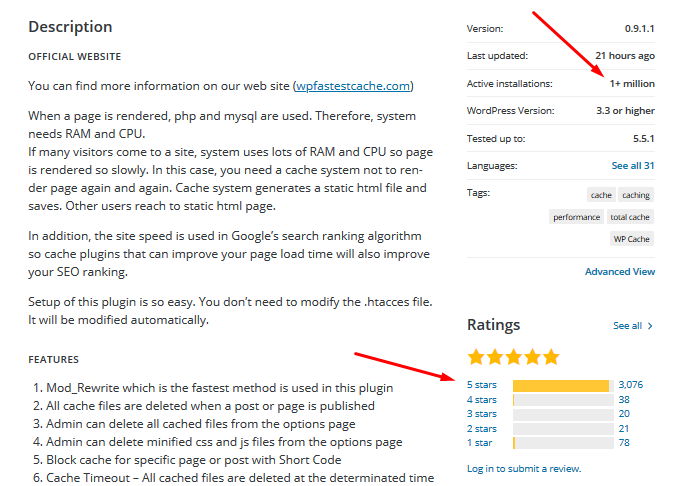 See the ratings and downloads for WP Fastest Cache above.

I tested a clean Wordpress install with and without the plug-in on GT-Metrix, one of the most renowned speedtests out there and you can see the results below. In seconds the loading time is halved and the total score is from 78 to 99 points. This is a great result for a cache plugin. 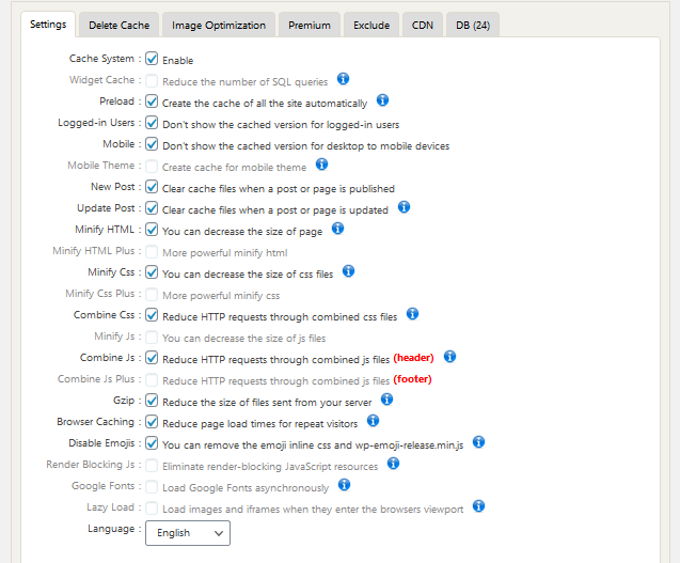 We should definitely draw attention in this WP Fastest Cache review to the fact that after installing the plugin, everything will work right away and your site will be much faster. Above you saw what has been activated without you having to do anything about it. The ease of installation is the same as with the professional and highest rated cache-plug-in WP-Rocket. 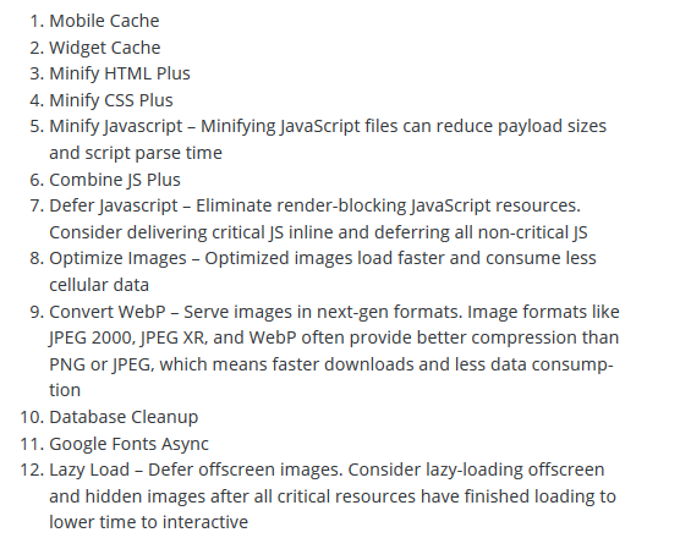 The most important things are minifying for all your css and js and combining the files. Images must of course also be optimized. I think these features should also be included in the free version. Also very important is Render-Blocking JS so that not all javascript is already loaded if not yet needed. And Lazy Load is also a very useful feature for which there are tons of free plugins so why not just have it in the free version of WP Fastest cache.

The premium version is priced at $ 49 per site, with multi-site discounts. WP Fastest Cache is complete and a very good plugin yet for the same money I would prefer WP-Rocket, the number 1 in my collection best cache plugins. WP-Rocket is a bit faster and the dashboard looks much better. All in all, a more professional plugin for the same money.

In this WP Fastest Cache vs WP Super Cache comparison, we now discuss the free version of WP Super Cache. The first thing to notice is that this plug-in is active on more than 2 million websites. In addition, WP Super Cache is very popular with many users who gave it 5 stars. What is striking is that there are also quite a few with only 1 star rating. 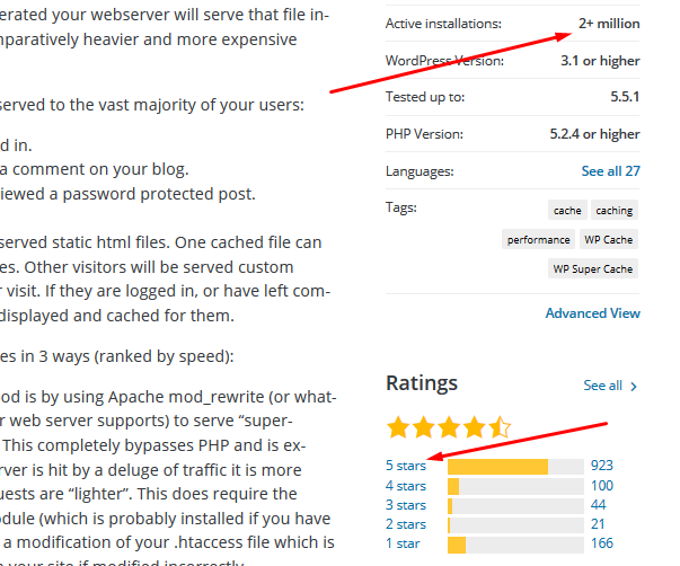 See the ratings and active installations for WP Super Cache above.

I tested a clean Wordpress install with and without the plugin on GT-Metrix, one of the best speed tests out there and you can see the results below. In seconds the loading time has improved considerably and the total score is from 76 to 99 points. This is a great result for a cache plugin.

Install the plug-in and then go to the screen for all plug-ins and click on "settings" at WP Super Cache. The plug-in doesn't seem to have a separate back-end tab in the left column for this. Then click on "caching on" and click "update status". 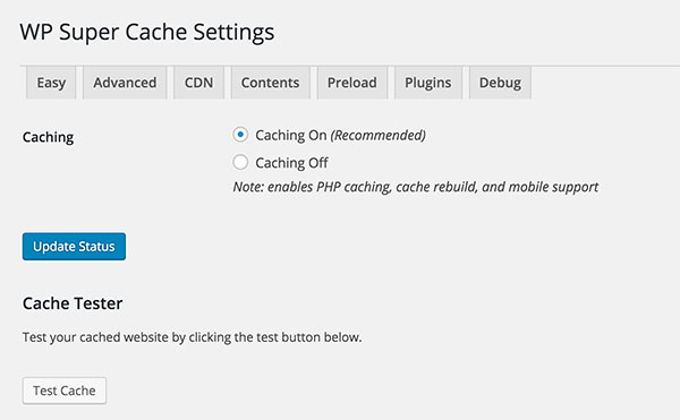 Also, the plugin does not compress your files by default. You must enable this at the "advanced" tab as shown below. 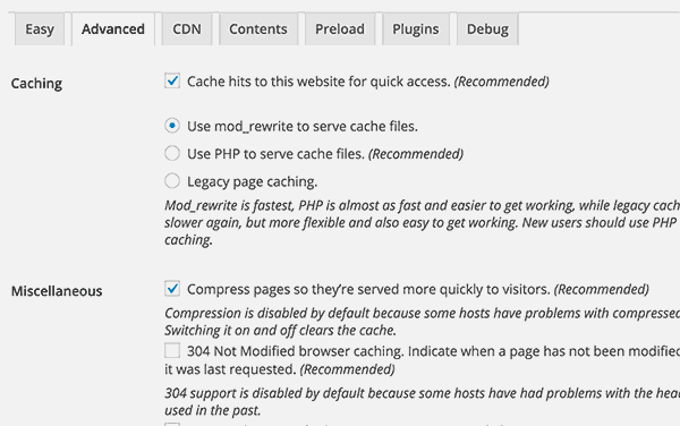 In this WP Super Cache review we should definitely ask ourselves why this plug-in doesn't work immediately after installing it. There are plugins such as cache-plug-in WP-Rocket where practically nothing has to be set and works immediately. WP Super Cache has a lot of things you can set under the "advanced" tab that beginners just won't understand.

Obviously missing options are Lazy Load and image optimization, but other plugins only offer this in their premium version. WP Super Cache does not have a premium version so we are not going to blame them for this.

WP Super Cache works well with CDN Networks if you prefer. With a CDN your website is stored on multiple servers worldwide to be downloaded from cache by visitors. This makes your website much faster, especially as visitors are further away from your origin server. But here too it is much easier to set up a CDN with WP-Rocket.

This plugin does not have a premium version. It was probably noticeable here and there that I am not completely satisfied with this plug-in. In my speed test above, I first had to set everything up properly to achieve such a good result. That is very cumbersome if we compare it with WP-Rocket or other better cache plugins that immediately score well.

I now also think I understand why the plug-in quite often scores 1 star. People who do not immediately realize that they have to set everything up first, get a worthless score in a test. Just like with bounce rate for websites, people are impatient and remove the plugin and rate it 1 star. But to be fair, WP Super Cache speeds up your website very well once it is properly set up.

Thanks for reading this WP Fastest Cache vs WP Super Cache comparison to the end. As for the free versions, they don't differ much in quality. The design in the back-end of the plug-ins is also similar.

What makes WP Fastest Cache the better plug-in for me is that it gives top results immediately after installing. WP Super Cache must be enabled first, and at least set it to compress files to give a reasonable result.

Not everyone understands this immediately and if one works for customers, a professional builder benefits from it working well immediately so as not to waste time. The premium version of WP Fastest Cache has some extra options that all premium plugins have and should only be compared to those.

Links and image-links on the page are
affiliate-links.