Kinsta is not a regular hosting, but one that takes all the work off your hands except creating your websites. This is called managed hosting, and their specialty is that your websites load super fast on their servers. In this Kinsta hosting review, we take a look at why it's worth paying $ 30 a month (1 website) for this. Hosters like this are the fashion, so many people already understand why.

Website visitors today have little patience, as soon as they get impatient and leave your website, you certainly don't earn anything from them anymore. Tests have shown that a website that loads 1 second faster can immediately generate 10% more turnover. So if you earn $ 3000 per month, that second will add $ 300. Ten times the price of this hosting. For large companies, the extra profits are of course much, much greater. Kinsta will on average not speed up your current website by 1 second, but probably by 2 or 3 seconds. Calculate for yourself what that yields.

Kinsta is built on the Google Cloud Platform which is the fastest network out there. If you compare that with a standard normal hosting where apparently outdated servers are used, the difference is 10x faster. Kinsta has many data centers and you can choose the location for your servers yourself, as close to your visitors as possible, of course. Kinsta has been around for more than 10 years in which they have perfected themselves as a managed hoster of course. Today there are more hosters like this using GCP, but Kinsta was the first.

What makes this hosting so much faster than regular hosting with another company? So to begin with, that it is connected to the Google Cloud that uses only high-quality servers and internet connections. This platform uses so-called VMs that have masses of RAM, SSD, and a very fast internet connection. Kinsta uses the C2 Compute-Optimized VMs, the cream of the crop in the CPU field. 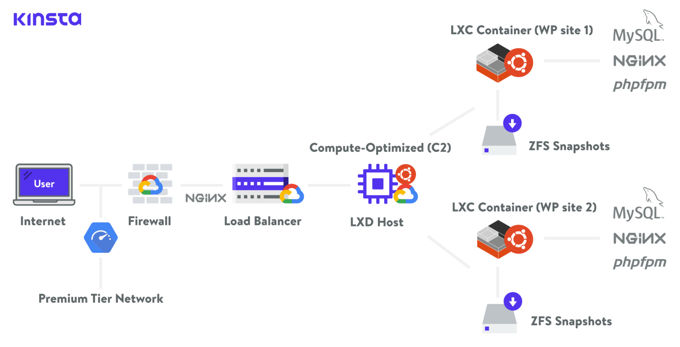 In this Kinsta hosting review, we don't go too far into the differences between the various networks that Google offers. What I do want to tell you is that Kinsta had a test conducted by Alexander Fauske (SEO specialist) who came to the conclusion that the GCP-C2 network for Wordpress & Woocommerce website is at least 2x faster than the standard Google network GCP-N1 . These are very extensive tests that were performed with and without Kinsta cache. View all results from the GCP-N1 & GCP-C2 speed test right here. The test was conducted on the websites of several of Kinsta's leading clients. Perhaps good to know is that at Kinsta all customers have their sites on C2 servers and for example at one of the largest competitors called WP-Engine this is only for elite users with expensive packages.

Have you been looking for the best cache plugin for Wordpress? You no longer need them if your websites are hosted by Kinsta because of their advanced cache systems already in place. Kinsta manages the following caches: Object-Cache, Bytecode-Cache, CDN-Cache, and Page-Cache.

With page caching, the complete HTML of pages is stored so that other pages can be built faster and already cached pages can be displayed almost immediately. In the case of Wordpress, PHP files are also saved and database queries are skipped. This all makes for much faster loading times. Kinsta uses the Nginx Fast-CGI cache module. The time in which the cache expires can be set by Kinsta customers. The kinsta Page-Caching is set to work automatically for Wordpress, Woocommerce and many more.

Bytecode-Caching means that PHP code is stored in order to be able to skip compiling it on further requests. Kinsta has OP-Cache active for all currently used PHP versions. Php 7.2, Php 7.3 and Php 7.4. As soon as new versions are released, they are automatically recorded. OP-Cache optimizes the use of Php files because they do not have to be completed over and over again. In Kinsta test environments, the OP-Cache is disabled because otherwise modified PHP files would not become visible until later. OP-Cache should not be missing in any network for optimal loading times.

CDN-Caching means that JS, CSS and Media files are stored on servers around the world so that website visitors can download them from a source close to their location. An additional advantage is that the original server is considerably relieved by the CDN. There are 2 types of CDN. The first type works with replacement URLs and the second type is a true proxy server where domains must have different name servers set up with their registrars. Kinsta uses KeyCDN which is of the first type. Since the Google Cloud is already protected, it is not necessary to provide DDos and Dos protection via the CDN.

Object Caching reduces the load on databases by storing database queries. This means that the database does not have to be queried with page requests. Wordpress already has a built-in Object-Cache for a few pages, but an Object-Cache that works for several pages is better. This can be achieved by placing a script in the wp-content folder or via a Wordpress cache plug-in with the option for this. However, it is easier to use the Redis offered at Kinsta for permanent Object Caching.

MyKinsta is your dashboard at Kinsta from which you can set everything up. The "feel" of everything is very organized, clean, and clear. Don't expect Cpanel as most things are already handled by Kinsta. As you know, they take all the work off your hands as much as possible, which is very pleasant. So you don't need Cpanel either, the MyKinsta panel is for personal settings of everything. We can safely say that this is easy to operate and understand for any layman. This panel was developed by UX / UI experts and you notice it immediately. 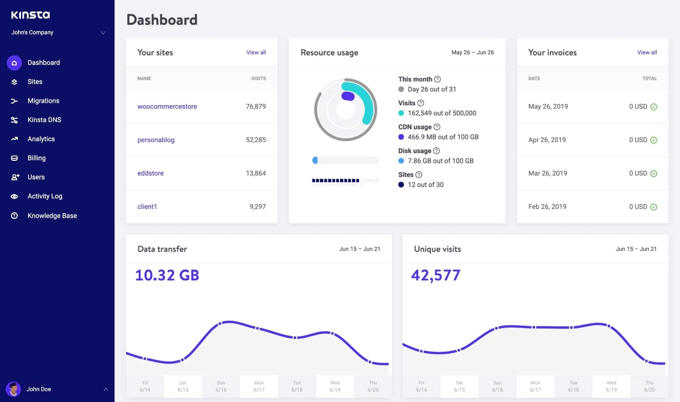 We should definitely talk about uptime in this Kinsta Hosting Review. Most normal cheap hosters often advertise with 99.9% uptime ie your websites are practically always online with a small exception. This is a lie with most hosters and they are closer to 99% and in some cases a lot lower. With Kinsta and other top hosts, the opposite is the case. Your websites are just 100% online all year round as shown in the image below. 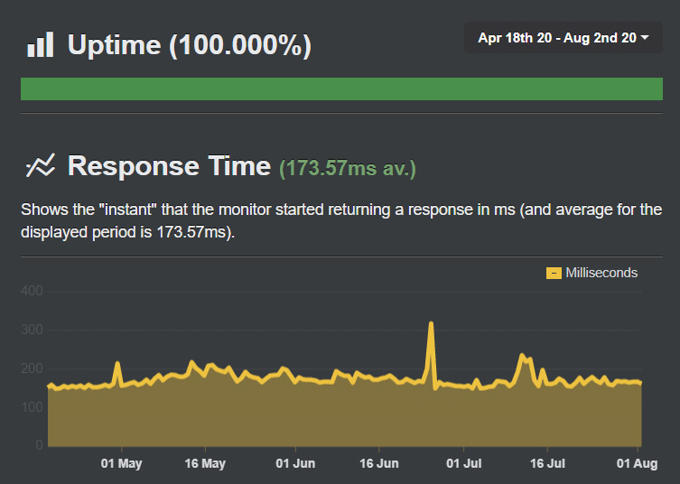 For starters, all sites are protected by GCP's enterprise-level firewall. Kinsta hosting has what we know as Symlink Race Condition Protection (Cpanel), or everything is isolated so that hackers cannot get from one website to another. Kinsta uses LXC and LXD Linux containers for this. Due to the high security at Kinsta, it is very difficult for hackers to break through security, but if someone logs into their account from a computer on which a hacker has installed a keylogger, it happens quickly of course. If a site gets hacked, Kinsta will take care of it, you don't have to do anything.

Other security measures include requiring difficult passwords, IPs that log in more than 6 times incorrectly are temporarily blocked, and GeoIP blocking. FTP is prohibited, only fully encrypted SFTP and SSH connections are allowed and SSL certificates are provided free of charge. Furthermore, all your websites are automatically backed up. Learn more about security at Kinsta here.

Kinsta is an expensive hosting service compared to the regular hosting that most people are familiar with. This is a service for people who get a return on it. If you have web shops that will generate a lot bigger turnover on Kinsta service. The price of hosting pays for itself so quickly. Of course, this applies especially to medium and large companies that are more or less obliged to load their pages quickly to be taken seriously and the extra turnover that can be achieved here is very high. Check out their prices here.

Thank you for reading this Kinsta hosting review to the end. Kinsta is my favorite managed hosting service and I think it's worth the money. I don't want to spend an extra chapter on their service but you can already imagine that it is first class I suppose. If you'd like to learn more about Kinsta, I recommend checking out their site using the button below.


Using our link you ALWAYS get 20% off on the Divi Theme!

Disclosure: Links and image-links on
the page are affiliate-links.